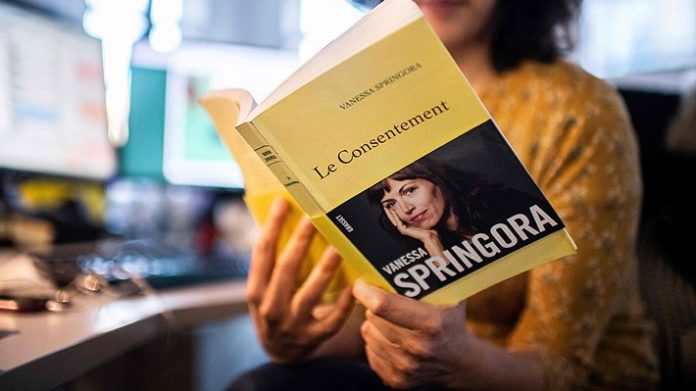 French writer, Vanessa Springora, published her memoirs titled Le Consentement (“Consented”). The previews, given to the press, show the way the author depicts, in her book, how she was seduced by a famous writer when she was only 14 years of age.

On January 2nd, the memoirs of 47-years-old Vanessa Springora were on sale with the title Consented. In her books, she narrates how she was seduced by the famous writer, Gabriel Matzneff when he 50 years old, and she was 14 years old.

“How can you admit you were abused when you cannot deny you gave your consent, and when you felt that adult did not waste any time to take advantage of it? I too will have to deal with feeling this victim complex for years”.

Like this, Springora, editor of Julliard, shakes the literary world with a 200-pages book, describing the influence the writer had in their relationship. Moreover, the book deals with the ambiguity existing back in the 80’s, in which sexual liberation and defense of pedophilia were intertwined, and where Matzneff provoked the fascination of the literary world.

By 1990, the Canadian writer, Denise Bombardier, described him as “one of those men that lure children with candies”, during Bernard Pivot’s show called Apostrophes, after Matzneff’s journals, Mes amours decomposes, became public between 1983 and 1984. Matzneff describes his sexual adventures with underage children of both sex, as well as his trip to Manila, the Philippines, where he abused children of ages 11 and 12.

At that moment, the writer was asked to retire, without taking away from him his taste for minors, the so-called libertine pleasure, as the press called it when they defended Matzneff from the Canadian writer’s accusation.

Springora analyzes the limits of consent in her newest book, especially in such an unbalanced relationship as the one presented in the book. She also criticizes the French intellectuals of that moment who never stood against people like him; on the contrary, they gave him the Renaudot award in 2013, thus proving that every institution failed to stop individuals such as Matzneff.

Literature was more Important than Moral in the 70s and 80s This fact was recently acknowledged by Pivot in his Social Networks. He added that now moral is more important than literature, which is a step forward, understanding that writers are the intellectual and moral product of a country and their time.

Nowadays, Matzneff, age 83, writes about spirituality and religion for the magazine Le Point. He acknowledges how sad he is for a “hostile, harmful, and clearly driven to bring him down.”

The editorial, Gallimard, in an independent course of action, has interrupted the sales of the writer’s journals, and it has removed the printed editions from bookshelves. This action is followed by the decision of the Ministry of Culture of taking away the economic aid for French writers with economic struggles; an aid Matzneff has enjoyed for 20 years. Likewise, they will review all the acknowledgments he received during his career.

An Investigation for Lack of Consent

Paris’ prosecutor office opened a preliminary investigation against Gabriel Matzneff for raping a 15 years-old minor, after analyzing the book Consent. The investigations are in charge of the Central Office for Reduction of Violence against People (CORVP), who will focus, specifically, on Springora.

The accusation’s aim is to find more victims of the writer, since in many of his works, like Les moins de seize ans (“Under sixteen”); he narrates sexual encounters with teenagers, boys, and girls of 11 years of age.

The prosecution’s motivation is to begin with the process and to provide answer to the victims, although it is likely the process stops due to prescription of crime, when there is a possible case of rape and sexual aggression against a minor.

On top of that, there is the opinion of the secretary of State for equality and child protection, who said that the cases of pedophilia must be firmly fought and they applaud Spingora’s courage for publishing her book.