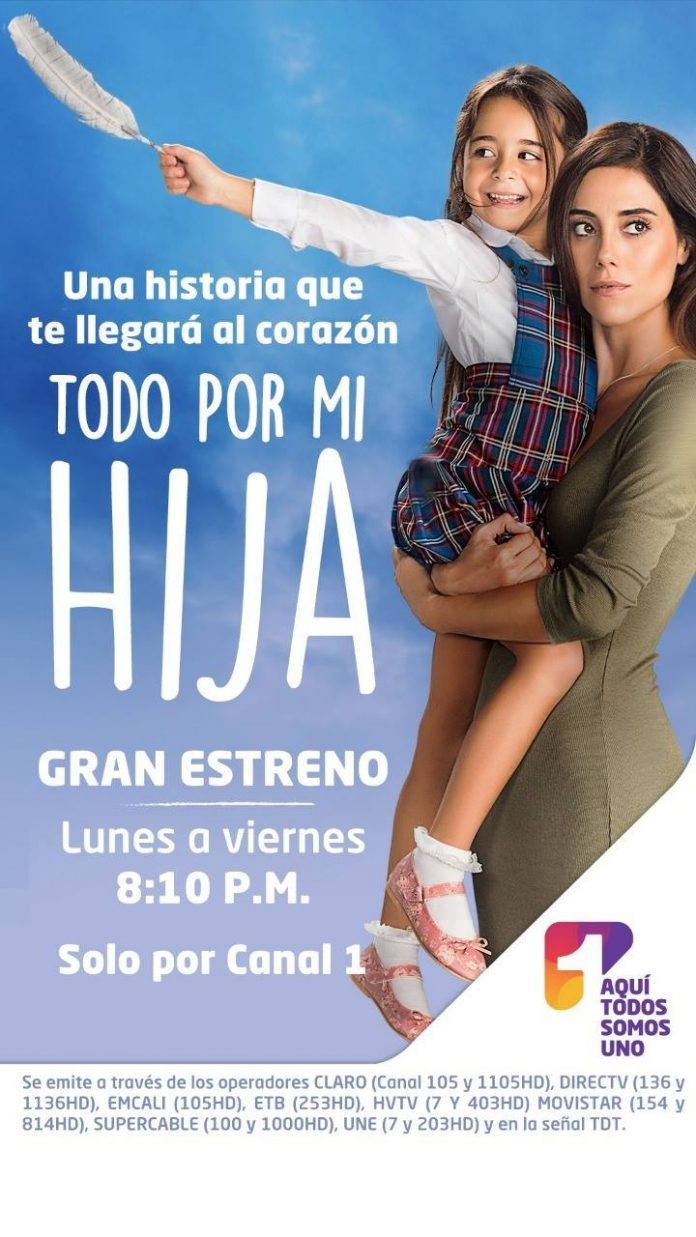 Monday, April 29th saw the Colombian premiere of the All for my Daughter series, through TV channel Canal 1. The Turkish series shows the harsh reality of child abuse all over the world, and the fact that girls are the most vulnerable to it. The series also tries to create awareness regarding child abuse at home.

All for my Daughter

The series tells the story of a young substitute teacher who, after discovering that one of her female students is abused by her parents, makes the impulsive decision of taking the child with her and starting a new life together.

Melek is the 6-year-old child who Zeinep, the teacher, adopts. Together as mother and daughter they will embark on many adventures.

Canal 1 is transmitting the Turkish adaptation of what was originally a Japanese drama that premiered back in 2016. The TV show has been nominated to many awards, such as the 2017 Golden Butterfly Awards in the Best Child Actor category and the 2017 Tokyo Drama Awards as Best Foreign Series.

In preparation for the show’s premiere, representatives of Colombian foundations and organizations against child abuse made an analysis of the girl’s story, concluding that children often face situations far worse than those that Melek lives through in the series. Isabel Cuadros, manager at the Asociación Afecto / Affect Association – which is considered a pioneer when it comes to reporting child abuse cases in the country—remarks that the series could be used as a teaching tool to demonstrate what child abuse is. In Colombia, it is estimated that a child is abused every 23 minutes.

95% of child sex abuse cases go unpunished, a fact that demands greater attention from the authorities. When it comes to the TV show, it also remarks that girls are by far the most vulnerable and affected ones when it comes to this particular type of crime.

On the other hand, experts from Aldeas Infantiles / Child Villages think that responsibility falls on all of society when it comes to strengthening family values.

An abused child can show issues when it comes to his or her mental development, which would ultimately affect their social and emotional growth. Sex abuse against girls and teenagers is the worst type of abuse that can be inflicted on them, and most of it occurs daily, all over the world, at all levels of society, and more often than not from within the child’s own family.

The main risk that victims face when they reach adulthood is the possibility of developing post-traumatic stress disorder.

Scientists from the University of Missouri have researched the impact of this trauma through a model that starts from the hormonal differences between both sexes, concluding that child abuse can harm a person’s response system when faced with stressful situation, thus diminishing their capabilities to properly solve them.

According to the study, when two properly-working hormonal systems battle stress, victims of childhood sex abuse are able to show resilience. On the other hand, a pronounced alteration in the cortisol and oxytocin levels indicate less efficient stress response systems.